Twister is doing very well getting around on three legs. Since he is growing, he can now jump on the couch without having to claw his way up it. He also can make it up and down the basement stairs, although he prefers staying in the living room. He plays all day with his kitten friend Woody (fuzzy picture below), and still goes in his cage on the coffee table at night to eat his can food and to sleep. 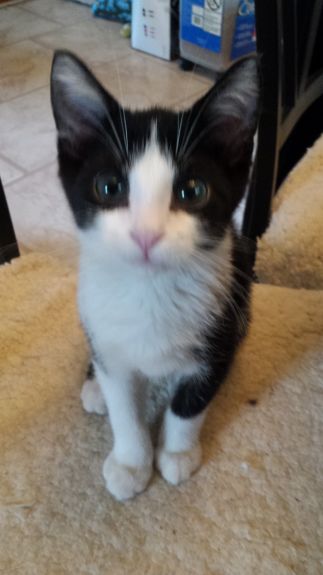 Pretty soon I am going to consider putting him up for adoption, and I have already stated that I want him adopted with Woody. Twister really relies on Woody for playtime and companionship, and they absolutely make a cute pair. 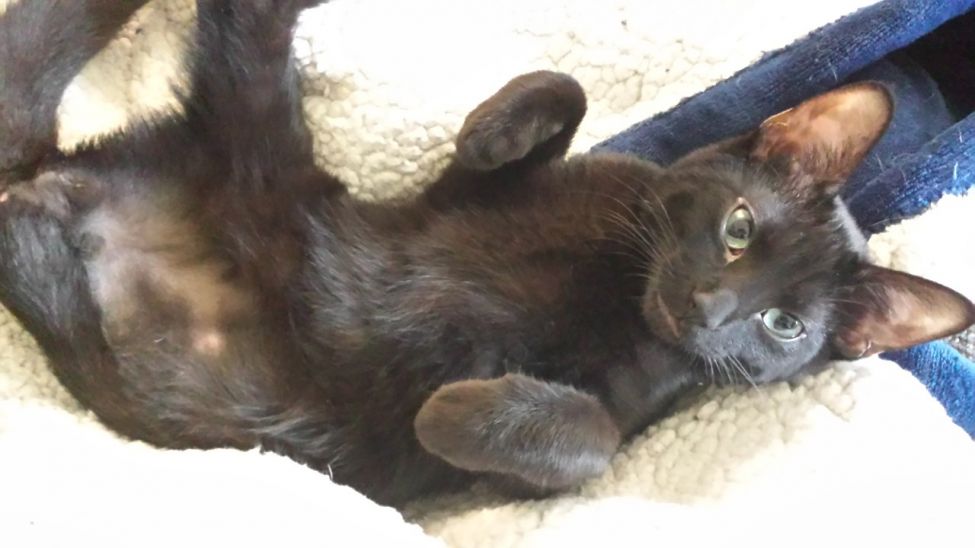 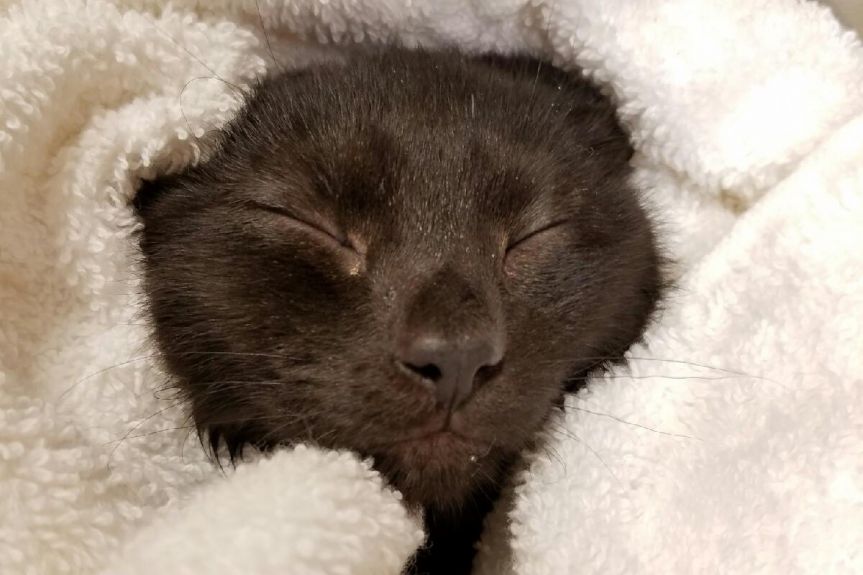 My name is Donna and I am a volunteer of Kindred Kitties (KK) in Kenosha, WI. I have been volunteering for 11 1/2 years and have fostered over 800 cats and kittens. Even though I feel like I have seen almost everything that can be wrong or go wrong with a cat, nothing prepared me for Twister.

I was volunteering at our Adoption Center on a day I normally don’t, when a lady came in holding a six week old kitten in a towel. She said his Mama had the litter under a neighbors porch (in our underprivileged/stray problem neighborhood), and they managed to catch him because he had a leg deformity. In fact the way he moved around, they thought he didn’t have back legs at all. She unwrapped the towel to show me a black kitten who had crossed back legs, like he was sitting “indian style” as we called it growing up. After consulting with another volunteer who lived close by and drove over to look at him also, we decided to take him in.

When I first started volunteering, KK had an orange tabby cat in foster named Austin who was born with his feet on backwards. We did a lot of fundraising and sold a lot of candy bars to get the money for the surgery he needed at the University of WI – Madison They actually remove his feet and turned them around the right way during the surgery. Twister’s legs were similar, but different. Searches on the internet dubbed him a “twisty kitten” in laymen’s terms, and I found out it was a birth defect with different causes and variations.

After a visit to our primary vet in town, we were referred to a Vet Specialty center 45 minutes away in IL. There they determined that Twister’s kneecaps weren’t in the proper position, plus they suspected muscle contracture (cause of some twisty legs) and hip dysplasia. They did surgery the following week to move his kneecaps. He came home with swollen, stiff legs and had to wear the “cone of shame” for a week. He did get up on all four legs for the first time within a couple hours of returning to my house to use the litterbox, and I couldn’t have been more thrilled.

After several days of healing, I let him out for short periods to walk around the house and to play with his kitten friends Henri and Delilah. Again I couldn’t have been happier to see him walking and even running, although his legs were very stiff. I was given stretching exercises to perform on his legs several times a day, and after a couple of weeks it was apparent that the left hind leg was still very stiff and the foot was turning outward. The right leg, by comparison, looked more and more like a normal leg everyday. At his follow up appointment with the surgical vet three weeks later, we received a referral to the therapy department of the center to see if therapy could help the left leg.

After her examination, the therapy vet recommended an intense course of daily physical therapy for three weeks. As I lived so far away and also worked part time, a therapy technician at the clinic volunteered to foster him for the three weeks. Even though I knew I was going to miss him, I was happy for the opportunity for him. After the three weeks, the vet called with bad news. His leg did not respond to therapy, so they took an x ray and found what they suspected was an old fracture site that was bad plus muscle contracture. We were given the choice of another surgery to try to fix the leg, which had the potential to turn into an amputation if the surgeon felt it was not repairable, or just a straight out amputation. The therapy vet was leaning towards the amputation, and after talking it over with other members of our rescue, we agreed. She gave us a referral to a colleague farther south in IL who was willing to do the surgery for us at cost. We made the appointment for 2 1/2 weeks later.

On amputation day (Aug 23rd), the vet took an x ray first and found that the ball of Twister’s hip wasn’t in the socket. So while we felt horrible for him, we were more happy with our decision to amputate as the leg had too much wrong with it and wasn’t ever going to be normal. The vet released him to me several hours after surgery, and I was apprehensive about caring for him because he screamed at everything and every touch, even if it wasn’t near his incision site. Thankfully the next morning I was able to handle him and inspect his incision site with no crying or screaming (from him anyways). I let him out of his cage about 5 days later for longer and longer supervised play sessions with his new baby kitten friend Woody, and he even followed him down the basement steps once without me seeing him. His stitches were removed a couple weeks after surgery and the fur has already started to grow back.

That pretty much brings us to the present. Twister is out of his cage playing with Woody for long stretches of time when I am home, only going back in at night. He is able to get up on the furniture and almost to the top of the cat tree, although I think he pulls himself up rather than jumps. I’m not sure he will learn to jump as he has never had four good legs so far in his life to know how to, but I think I saw him jump up on the low shelf under my coffee table yesterday. I am trying to find information on the internet about caring for tripods and any long term implications of the hind leg amputation, which is how I found this site. Haven’t had a chance to explore much yet, but I am hoping to learn all I can. 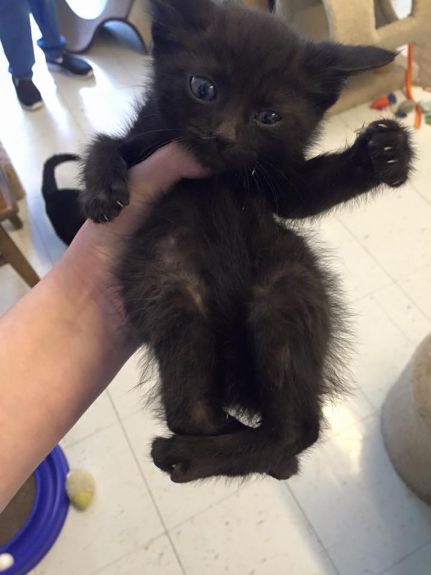 About Your Tripawds Blog:

New Tripawds Bloggers: Please review your default first blog post at left for lots of helpful links for getting started with your blog or review the Help Videos in your dashboard. Edit these widgets from your Appearance settings to remove this notice, upload a custom header photo, or choose from 130+ themes, and much more!

Twister's Journey from deformed rear legs to tripod is brought to you by Tripawds.
HOME » NEWS » BLOGS » FORUMS » CHAT » YOUR PRIVACY » RANDOM BLOG